With increasing drug costs, especially in the biologics category, plan sponsors are looking for ways to better manage expenses.

What some plan sponsors may not know is that biosimilars present a clinically viable, yet more cost-effective option. In fact, they can cost 10% to 57% less than the list price of a biologic drug.

Biologics, complex medications at the cutting-edge of drug development, have seen dramatic growth in recent years. Their proportion of net drug spend has increased from 30% in 2014 to 42% in 20181 and the market for biologics in the United States today is worth $211 billion.2

Biologics are often, but not always, considered to be specialty medications and are being developed both to treat conditions that have no treatments and as an option for conditions with existing therapies.

To better understand biosimilars and how they may benefit your plan, here’s a behind-the-scenes comparison of the two.

BIOLOGICS AND BIOSIMILARS: WHAT THEY ARE

While most medications are created through simple chemical reactions, biologics are manufactured using living cells. These complicated biologic processes make them costly to produce and harder to replicate. As a result, there are no generic biologics. While generics are created by reproducing the exact chemical reactions used in making brand medications, the processes used to make biologics are not as reproducible.

While not perfectly identical, biosimilars are biological products that are highly similar to their reference biologic. For a biosimilar to be approved by the FDA, it must have no clinically meaningful differences in safety, purity and effectiveness compared to the original.

Most biologics and biosimilars are injectable medications, and many utilize complex and proprietary injection devices.

hOW BIOSIMILARS DIFFER FROM GENERICS

Although they are similar to generics, biosimilars have some key differences:

Biosimilars may not be approved for all indications

Biologic drugs are often approved to treat additional conditions long after they first come to market. Because drug makers can be granted a period of exclusivity when a medication is approved, these newer indications are often protected from competition while the older ones are not, meaning a biosimilar may only be approved to treat the older indications. While biosimilars should be just as effective for the newer indications, the lack of FDA-approval may prevent physicians from prescribing a biosimilar.

According the IQVIA Institute, biosimilars are projected to produce $104 billion in savings between 2020 and 2024, a huge jump from $19 billion in savings between 2015 and 2019. This is a result of an anticipated increase in the availability and use of biosimilars. While only 33 biosimilars have been approved so far, 108 are currently in development. To add to this, 19% of the biologics market is already experiencing competition from biosimilars and an additional 64% will face potential future competition.2

Furthermore, individual biosimilars are increasing their market share relative to their reference products. While biosimilars were previously slow to gain acceptance, three 2019 launches, bevacizumab, trastuzumab and rituximab, have grown to almost 60% of their respective markets after only two years.2

In addition to savings for plan sponsors and the health care system as a whole, biosimilars can reduce costs for members as well. Members with a plan design that requires them to pay a fixed percentage, commonly referred to as co-insurance, benefit from reduced list prices. Also, biosimilars may be placed on lower formulary tiers to reduce copayments, similar to traditional generics.

Biosimilars have the potential to enable savings for both plan sponsors and members and Navitus encourages their use for every available condition, either through our standard pharmacy benefit formulary or our Medically Administered Product (MAP) formulary.

For more information, check out our e-book on achieving a waste-free formulary. 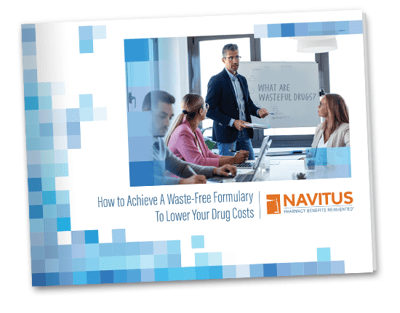